Tip of the Week

Say it simple, make it easy 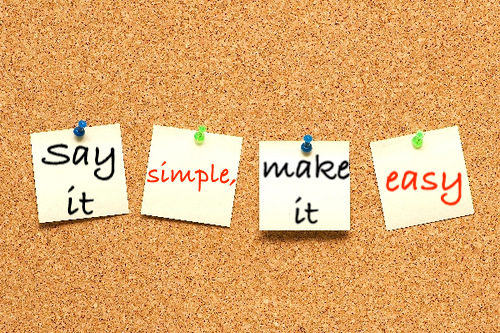 If you want to be the parsley of all the sauces… do not repeat like garlic!

Say things once, choose the vocabulary well, take care of the forms and express an idea in a sentence or if you have a great capacity for synthesis in one word.

Do not repeat it, it is not necessary, once is enough.

Once is enough, two is unnecessary reiteration, three sounds justification.

Do not scratch, it’s not necessary.

Simply say it with the least number of words possible, the most educated and do not give more explanations or come back to it.

On a professional level, I write medical reports in English. It is a very technical language, with simple phrases: subject, verb and predicate and period. And the Conclusion: just a sentence. It does not give rise to second interpretations.

Oh! but the Spanish reports, they are something different… the same patient, the same images but in the report how many sentences of two or three lines, subordinate, in passive voice, with multiple copulative or disjunctive conjunctions… what flourish language, and as a Conclusion: a ” summary “of the three previous paragraphs written. Result: second unwanted interpretations.

How much we, latin people, love to write, describe, beautify and decorate the things we are talking about! It is a rich and beautiful tradition if you are going to write a poem or a novel, but if what we are talking about is a medical report or a day to day conversation, then, less is more, unless you are talking to an Argentine, or you are literally crushing the opposite.

This issue has been so important in my company that, at the beginning we had a language and style corrector and over time, and with a very good criteria from my point of view, they have designed some “templates” for each report : for lumbar spine, cranial… you just have to, simply, “fill” it. At first some of the radiologists (Italians the most) showed their discontent: “the reports were impersonal and part of the charm was diluted.

But I have to say that the result, that is, the response from the doctors who read them has been very satisfactory, in fact they are delighted, because they find that the reports are more ordered, they are more concise and above all they do not give rise to erroneous interpretations.

Why do I explain this? for two reasons: one to demonstrate the importance of clarity and non-repetition in the expression of language in accordance with what circumstances, and another because it occurred to me that in some situations, for example those I listed above:

I was thinking that t would be good if we had some “templates” for each of these occasions where to put a sentence in each section, short and with the main idea, submit it later, or not, to a “corrector friend of style”, and then read it out loud.

The message would become much clearer, the receiver would understand it well, there would be less misunderstandings and as a result, communication would be more effective.

We would avoid absurd reiterations, heated discussions and drilling those around us and we want to.

So the next time you find yourself in one of these situations, before you start talking, make a small outline with an introductory phrase, a nodule and an ending sentence and finish.

Definitely, if you want to break with your partner… use a template! 😉

And, you will understand that this post ends here and do not repeat it to you again.